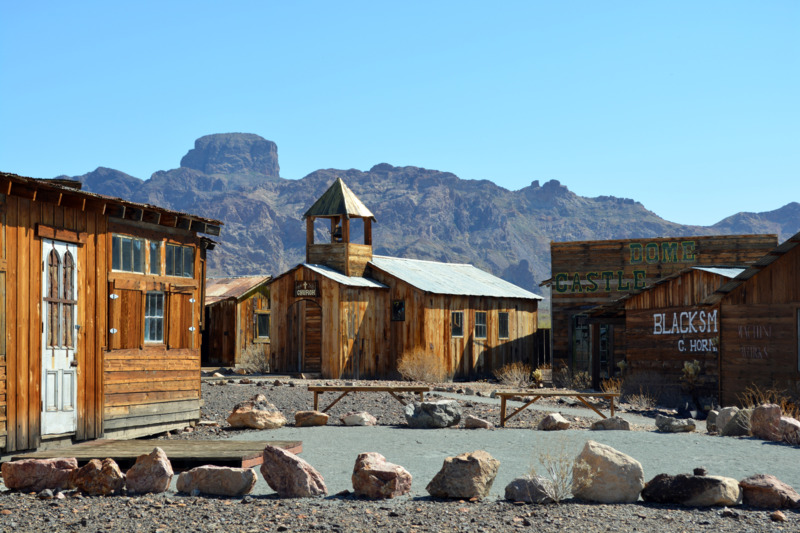 Castle Dome is located on the west side of the state of Arizona, between Quartzsite to the north, and Yuma to the south.  Home to Arizona’s longest working mine, Castle Dome operated from 1862-1979, and at its peak had over 3,000 residents.   Spanish conquistadors were the first to discover silver in this area in the 1600’s, but it wasn’t until the mid-1800’s that Americans began to mine rich silver deposits in Castle Dome, and more than nine million pounds of lead ore were extracted during both world wars, to meet the demand for bullets.  The mines closed for good in 1979, but the story of Castle Dome was not over.  Allen and Stephanie Armstrong bought the entire ghost town in 1993 and Allen, a former stone mason, who had once built log cabins from found materials, had exactly what it takes to recreate this sprawling museum.  We’ll tour 50 buildings, including a hotel, doctor’s office, church with functional bell tower, blacksmith shop, assay office, sheriff’s office, jail, and several saloons.  Most of the artifacts on display were pulled from mine shafts.  Allen has been exploring the more than 300 mine shafts, by repelling, sometimes more than 250 feet, into the darkness to enter mining shafts loaded with artifacts—beautifully preserved by the right blend of temperature and humidity.  We’ll stop in Quartzsite for lunch on self, before heading south on Highway 95 to Castle Dome.  Join us on this remarkable tour to a town that once stood larger than Yuma, offering a true glimpse into life in the Wild West!