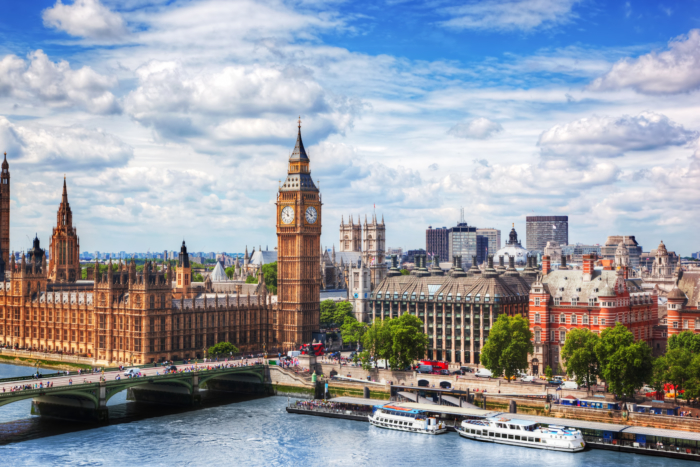 London calls. Experience the regal touches and daily charms of life in this grand city.

Welcome to London, a sophisticated metropolis with a timeless style all its own. Its bustling city streets are lined with beautiful gardens, fascinating museums, celebrated monuments and grand theaters – and you’ll be a part of it all! This evening, experience a classic British pastime when you join your fellow travelers for a special welcome dinner. (D)

Day 3: London- Join a local expert on a panoramic city tour. See Trafalgar Square, St. Paul’s Cathedral, the Tower of London, and Buckingham Palace, the London home to Britain’s royalty since 1837. At Westminster, see the Houses of Parliament, Westminster Abbey and Big Ben. End your city tour with a visit to Harrods, London’s most iconic department store. This afternoon, become acquainted with London’s trendiest borough on a walking culinary tour of the East End. Discover a world of English cheeses and traditional fish and chips, taste London’s Indian influence with a sampling of curries, and experience East London’s “pub of the year” for an ale tasting. (B) (L)

Day 4: London- Start your day like a true Londoner. Hop on the famous Underground, known to locals as “the Tube.” Opened in 1863, this engineering marvel was the world’s first metro system. Next, it’s your choice! Join a local guide and explore the neighborhoods of Kensington and Knightsbridge, known for their iconic shops and famous residents, before a visit to Kensington Palace, once the home of Queen Victoria and Princess Diana -OR- travel to Westminster station and snap a photo in front of Big Ben before heading north on Whitehall, known as the center of Her Majesty’s Government; catch a glimpse of 10 Downing Street before visiting the Churchill War Rooms. Later this afternoon we gather to enjoy a matinee performance at a London theatre. (B)

Day 5: London- Travel across England’s beautiful countryside en route to the historic city of Oxford, one of the world’s most famous university cities. Join a local expert on a privately-led walking tour that brings life to this quaint, yet privileged place. Enjoy some free time to explore the city at leisure before setting out to visit Blenheim Palace, one of England’s most magnificent homes, for a self-guided tour. Famous for being the birthplace of Sir Winston Churchill, this UNESCO World Heritage site offers a glimpse into the life of English royalty. (B)

Day 6: London- It’s your last day in London. Spend the day independently exploring more of London’s treasures. Or you may take an optional excursion to Windsor Castle: originally built to guard the city of London, Windsor Castle has been home of kings and queens for nine centuries and is the oldest royal residence still in use today. Tonight, gather for a special farewell dinner at a favorite London restaurant and toast the end of a wonderful getaway! (B) (D)

Your tour comes to a close today, leaving you with many pleasant memories. (B)